What is a blog novel?

The idea of Blog Novels came to me through Mark Twain who talks to me in my sleep… not really. Mark Twain used to submit all his books, a chapter a week, to his local newspaper who published his work. This is how Huck Finn came to be. Also, The Green Mile was published in this fashion… kind of. It was published as 6 low-priced paperback novellas by Stephen King. Stephen King later released The Green Mile as a whole later on.

Personally, I love the idea of blog novels! Here are the two I am currently working on.

A Blog Novel by Angela B. Chrysler When three miscreants wake up locked in the basement of a Howling Hag, they have no idea what is in store as they embark on their adventure. After scaling the giant glowing mushrooms, these three brave, though not so smart adventures journey through Ja’Kitch Wood to the Village N’Erd where they uncover a bad case of memory lapse, missing children, and one sassy Half-Elf, Orga, who has nothing better to do than tag along with a Dragonborn, an elf, and a human who took up the Priesthood to compensate for all the debauchery that he has no intentions of giving up.

As these four adventurers team up, they discover The Order—the ruling body located in Waterdeep Hell-bent on ruling the world… if only they could find and collect the 12 Eladrin Stones scattered across all of Faerun. Now, the only ones who have a chance to stop The Order are The Brave And Thoroughly Fucked Adventures.

Orga: the sassy red-head—half human, half-Eladrin—rogue who knows too much about everything.

Golgh: the disgruntled Dragonborn warrior whose only desire is to break the curse that keeps him from his kingdom.

Varghul: the trigger-happy Elfin ranger whose only in it for a good time.

Benison: The perverted human who only took up the priesthood to compensate for all the debauchery that he has no intentions of giving up.

Join this group and Sariel in this on-going saga dripping with booze, sex, and murder… and a whole hell of a lot of debauchery.

Zombies From Space and Vampires

A Blog Novel by Angela B. Chrysler (Yep. I went there. Somebody had to.) 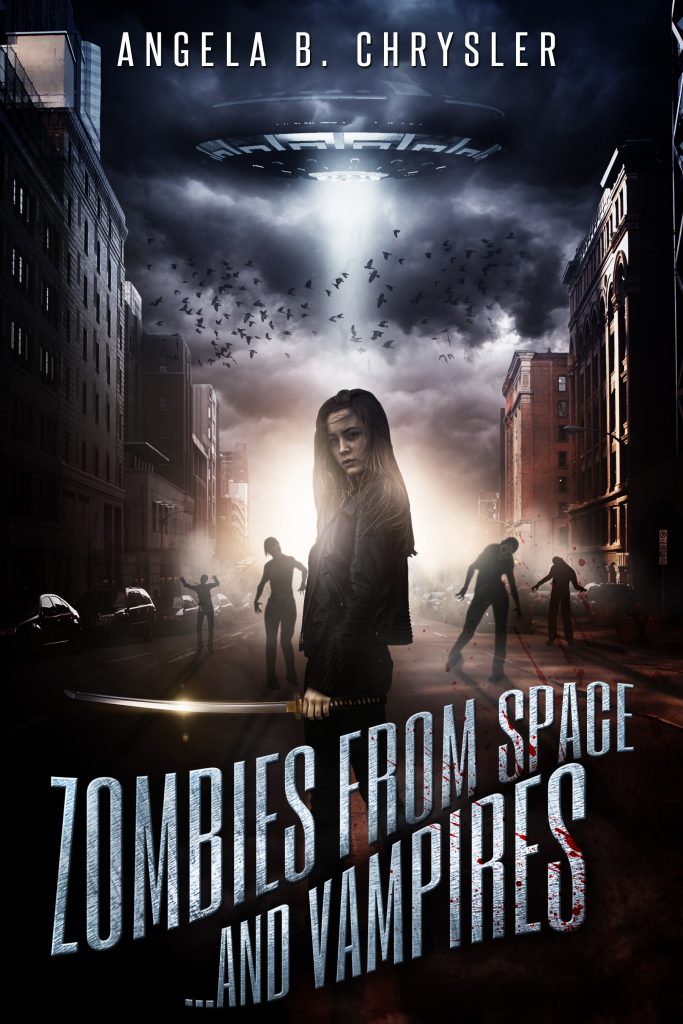 Aria was an average nineteen year old with average problems. She was looking forward to living on the road, traveling cross-country with her father in their RV. Perhaps pick up an adventure or two. “Average” was quite realistic until a vampire rescued Aria from a pack of walking corpses moments after her father vanished. No sooner does Aria wake in “Dracula’s castle,” than her rescuer, Caius, moves in to convert her… or eat her. Aria doesn’t exactly stick around to find out.

When a human arsenal shows up, Aria takes her chances with Cin Dixon and Company, landing herself on board the HMS Slush Brain: home to a captain with a dangerous enthusiasm for adventure, and a booze-guzzling, apocalypse-loving pirate crew. Among these misfits, Aria learns the truth of an impending alien invasion harbored for years by the world governments.

The aliens are Weeches, a zombie-looking race who had been negotiating the survival of mankind for years. Their diet? Humanoids. Their plans? To invade, secure, and round up the “cattle” on earth… and humans are the cattle. Turns out, the negotiations were only a diversion to buy more time for reinforcements to arrive. Within hours, all of earth is crawling with alien zombies looking to reinforce the New Rule. This invasion changes more than just the fate of mankind.

After centuries of living in secret, vampires are forced to emerge once more, and step into the light. If they are to preserve their food source, the vampires must rise up and fight the alien zombie race. This move launches earth into an all-out war between alien zombie and vampires with humans as the spoils.

In an effort to fight for mankind, Aria joins forces with the Slush Brains, and fights alongside the craziest group of booze hounds. These Sadists are eager to embrace the post-apocalyptic, zombie killing, vampire slaying life-style and fight for the freedom of Man… or go down fighting.

Zombies from Space and Vampires is a Blog Novel by Angela B. Chrysler with a chapter published every other Friday right here at www.angelabchrysler.com.

A Blog Novel by Angela B. Chrysler

Evolution stops for no god. While Man Kind goes on to rule the world, animals proceed to evolve as they have always done. The year is 2615, and, at long last, animals are able to match the human species in their thinking. But not all humans accept this change. Most appeal it. Desperate to hang onto the “Ego” awhile longer, Man does what it can to keep animals in their status. But like humans, animals too are developing ethics, morals, beliefs, and free will alongside their rising intelligence.

When Anna, an orphaned child who lives on the streets, finds a stray dog with the power to read and write, the communication barrier between man and animal is breached. But there are many who want to stop this from happening. Although some communities have developed where only intelligence determines your social status, others, most, are still held in check by fear, instinct, ancient gods, and control.

Take my hand and descend into the bowels of darkness! Join me so that you may lay upon your death bed and say that you have lived! Adventure so that you may taste the sweet nectar that flows from the earth… and receive a monthly newsletter from me.

Subscribers receive the biweekly digests and the Newsletter every 1st of the month. Click here if you have questions about subscription.