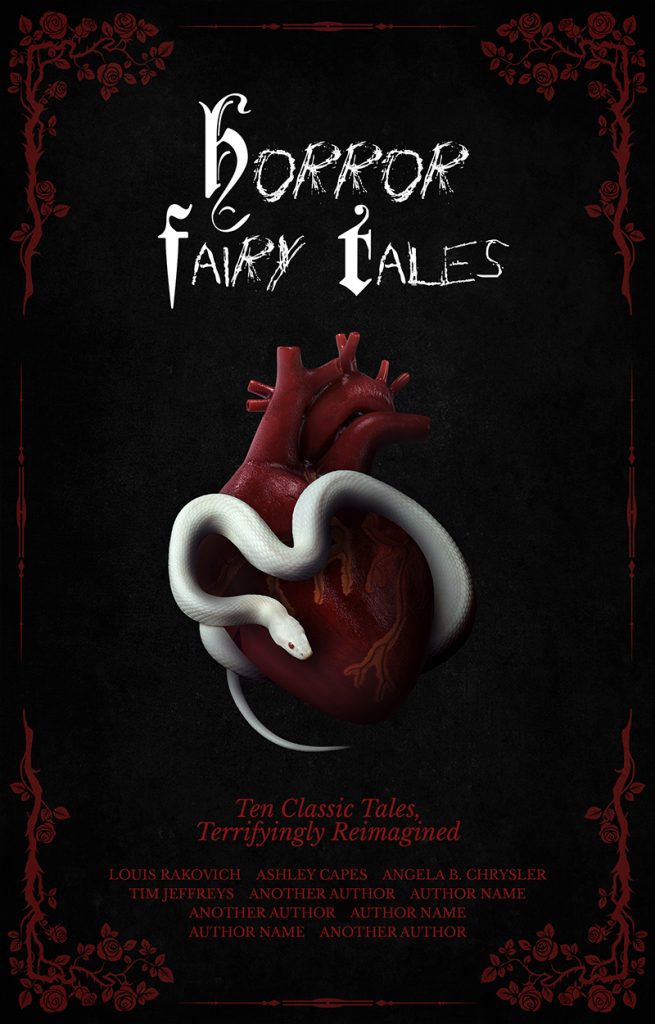 Beast’s Beauty is scheduled for release in the anthology Horror Fairy Tales October 2017.

This retelling of Beauty and the Beast is retold with elements true to the original story by Gabrielle-Suzanne Villeneuve.

When Belle’s father is unable to pay his debts, Belle is taken to serve for a cruel lord. But determined to free her, Belle’s love, James, sets out to find his fortune in a mysterious castle rumored to be plagued with treasure and ghosts. Instead of treasure, James finds a spell that transforms him.

Enjoy this sneak preview while you wait.

Long ago, when there was still magic in this world, there lived a great wizard who came upon a magic mirror. The mirror showed him everything hidden in his heart from wishes to dreams and desires. The wizard was lonely and so his first thoughts were filled with a love.

The mirror obliged and showed him a maiden at work in a garden. The wizard, at once, was smitten and set to work forging a ring that he might present to her. Guided by the visions revealed by the mirror, the wizard searched the world over until, at journey’s end, he found her tending the roses in her garden. The wizard told the maiden of his travels and of the magic mirror. Enamored by the wizard’s story, the maiden accepted his proposal.

The happy couple traveled to the castle, and there the wizard built his wife the grandest of gardens. They lived happily for many years as the wizard, time and time again, consulted the mirror which revealed the desires of his heart.

Dedicated to the world of arcane arts, the wizard spent his long life collecting relics of the magical world. Leaving his wife for months at a time to tend her gardens, the wizard journey far, each time bringing back the most valuable of magical artifacts. The mirror, he always kept with him so he could look back at any time and gaze upon his beloved who was always content to remain within her gardens.

Over time, the wizard’s collection grew until it was substantial and dripped with treasures discovered in the farthest lands of the East, and relics uncovered in the depths of the jungles.

For nearly three lifetimes, the wizard and his wife lived quite happily, but this was not to last.

Magic stirred within the corridors. Magic seeped from the walls. The ancient spells buried away within the wizard’s books began to move. It was said that the wizard’s collection contained so much magic that all his possessions began to breathe.

One day, shortly after the wizard bid farewell to his wife, the relics came to know desire and took on a life of their own. Those that were made with evil intent, adopted the ways of their creators and they sought to know more and decided to leave the castle.

The wizard’s wife fought the relics, desperate to keep their evil from spreading. But the magic that gave the relics life was too powerful and they injured the wizard’s bride.

Sensing something was wrong, the wizard called upon the mirror and saw his wife dying. Immediately, he returned to the castle, but it was too late. He found her trying to crawl back to her garden. She died in his arms. As the wizard held her, the relics rose up forcing the wizard to battle the relics he had once treasured. But his collection was too great and he became mortally wounded.

Forced to abandon his love, he took the ring from his wife’s finger and fled.

The wizard sealed himself away in his wife’s garden with nothing but his magic mirror and the ring he had forged for his wife. With his final breath, the wizard spoke his last spell and wrote an inscription in blood upon a stone. Cursing the relics, he bound them to the castle. Only the magic mirror he always carried with him, was left unbound to his curse.

As his spell enveloped the castle, the wizard succumbed to his injuries and died.

It was in this manner that the castle was again forgotten.