I was walking the streets of New York a few weekends ago. I don’t think I’ve tripped over so many homeless. Most are men ranging from mid 20’s to 40 with handouts. I saw one woman (the only woman) in her 60’s. In wondered who abandoned this old woman that she had no kin who would care for her. I don’t know why the men can’t work. I don’t know their story. I don’t help them. They all have signs briefly telling their story. “Out of work. Please help.” “Homeless. Need food.” “Fuck Trump. Need Weed. Please Help.” Not kidding. 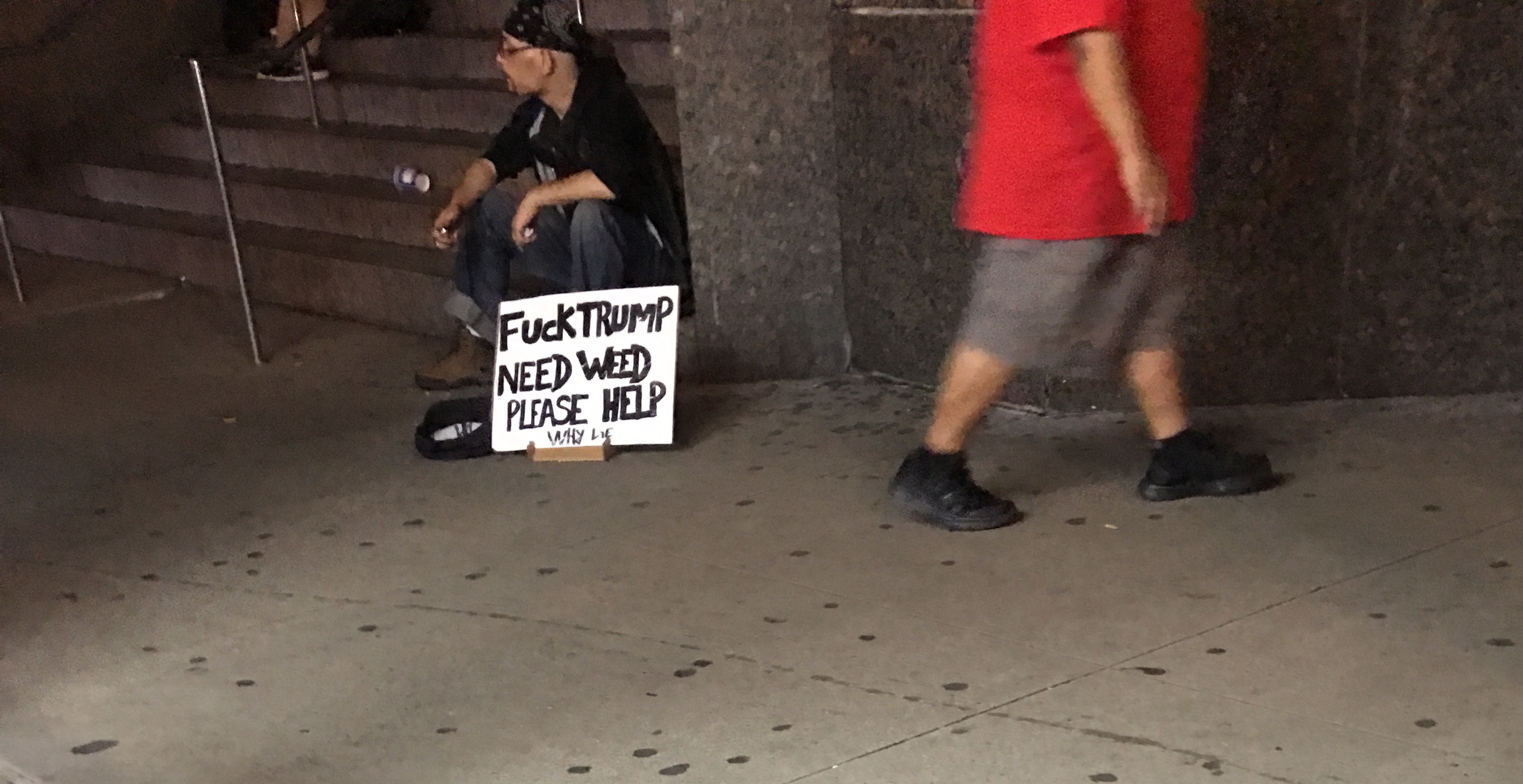 I ignore them. You have to. There are too many, and people lie. Besides, they look like they are quite capable of working. Why don’t they?

It was late one night. Nearly 10 o’clock and I needed to run to one of the three CVS’s on my block, so I grabbed my wallet and headed out. The homeless still sat on the sidewalk in their places. I paid them no mind until one…

He was younger. Much younger. He wore one shoe and a bit of white cloth wrapped around his left foot. A blue blanket, the kind they provide at homeless shelters, was pulled up to his chin. He had his eyes buried in his blanket, and he was silently crying into the blanket.

He looked up from his blanket and said, “Thank you.” I was already walking away, shaking back tears.

“What’s wrong?” my husband asked, then saw the boy. “Did you just give him money?”
“Leave me alone.” I said. It’s all I could manage to say.

What can I say? He was 16. He wasn’t a man. He wasn’t a bum or a beggar. He was a child. It was 10 at night. If he had a home, he’d BE home. Where were his parents? Where was his home? I have a 16 year old and a 15 year old. I’ve been watching them STRUGGLE to find jobs for a year now. 16 year olds CAN’T work. Almost no one will hire them. He was the same age as my Emily. So what if he ran away! He made a mistake, if he did. We all make mistakes. He’s 16 and too young to not see kindness from strangers. He’s too young to make a mistake so unforgivable as to remain lost. If he were lying…

And this is what changed my mind. If he were lying then I had just been “had.” But if he wasn’t…If he really was a child who just wanted to go home, could I walk away, do nothing, and still live with myself? There is a risk with the homeless. It’s a scam in most cases…but this was a child. I didn’t need to read his sign to know that. it’s why I looked down in the first place. It’s why I noticed him at all. He was a child. That wasn’t a lie.

Truth is, if he was lying, it was a risk I was willing to take because of that small chance that he was telling the truth. And the risk was worth it.

I returned to the hotel and, at once, explained everything to my husband. I couldn’t stop crying.
“Do you need to talk to the children?”
My children were in their beds. My children were sleeping. That boy wasn’t. Emily was the only one still awake.

She did. She confirmed her “runaway plan.” Yes. My children all have “runaway plans.” Unsatisfied, I ended the call and went to bed. I didn’t sleep.

You only gave him $40, I scolded myself. Would it be enough? How do you get out of New York? Where is home? What if his parents had no phone number? Or what if they were so poor, the phone was disconnected and he could no longer call? He didn’t even have shoes. I should have bought him shoes instead of handing him cash. I pulled out my phone and googled “what to do if you find a homeless/missing child.”  I learned a lot over the next hour.

Did that boy know about the center? Here’s the kicker. I found the boy on 8th Ave. The center was on 140th ave. A day’s walk would get him there, but he had no shoes. Should I have bought him shoes? The City’s 18th Precinct, however, was on 8th ave, just 1 block down, and they would have driven him down to the center. Did the boy even know about the center? Did he know that the police would help him? He didn’t need to be begging at all. What if the $40 wasn’t enough? Where was home? What if he lived in California?

I didn’t sleep. Instead, I made a plan to wake and buy him breakfast. I would drop off the breakfast in the morning and see to it he at least knew to go to the police. I would tell him about the center and loan him my phone. By the morning, he was gone. Was the $40 I left him enough? I like to think it was. I like to think he found his way home. A week later, I was back in the city in the same hotel. I didn’t see the boy.

I ran away twice as a child. At 8 and again at 15. At 18, I was almost abandoned in Newark with no way to get home and no one to call. For me, runaways are very real things. It’s why my children all have runaway plans. Did I see my own possible future in that boy? Yes. Yes, I did.

When I got home, I had a sit down will all three of my children. I told them about the centers. How, they don’t have to beg for money to get home. “Just go to the police,” I said. and told them about my “runaway plan” for them. “If I lose one of you, the address and the phone numbers would never change until you’re safe at home. The light would go on and it would stay on until you are safe at home.” They could call for a ride. Lecture-free. Judgement-free. Compassion-full. I would drive anywhere and pick them up, and I would bring them home. Don’t beg for money. All you need is a phone.

I’m asking you, if you have children, let them know. Pass this on to them. Look into the runaway centers, just so they know.