Recently, I’ve become painfully aware of one topic that has been creeping up more and more today. Ever since Trump took office, the subject of racism seems to be everywhere. I think often of what Morgan Freedman said. “[To end racism,] stop talking about it.” I respect Mr. Freedman, but I don’t think I agree with his approach. Prior to Trump, we didn’t talk about it. Now, everyone seems to be talking about. This change did create the racism. It only made those of us not talking about it aware that it was still very much a problem. In my world, racism was dead. In my own little world inside my closed box where ignorance kept me blissful…and delusional. Talking about racism didn’t suddenly create the hate that seems to be flowing through this country. Talking about, however, did make me aware of the problem. It violently stripped the delusion away leaving nothing, but the cold hard reality that racism is very much not a a thing of the past. With all due respect, Mr. Freedman, I must disagree.

I am not racist. At least, I hope I’m not. I certainly never intended to be. I’ll be revisiting this sentence shortly.

This topic bluntly surfaced last Friday. It was time to introduce my 14-year old to the 80’s/90’s action film. We started with Die Hard With A Vengeance. “It’s rated R for the swearing,” I told her. “I don’t care about the Fuck word. They do use the “N” word a lot.”

“You are!” Bruce Willis says through his migraine. “You don’t like me because I’m white!”

Mr. Jackson’s eyes bulge. “I don’t like you because you’re going to get us killed!”

This got me asking the question: What is racism? When is racism racism? Is racism wrong? Am I racist?

Now, before I launch into this, a few things. I do not condone hatred. Slavery and segregation is disgusting. Every man, no matter race, gender, or background, has the right to freedom.

I sat down with my black girlfriend. She’s Black. Not “African American.” I checked. She hates the term “African American.” We reviewed this topic: I, a white girl who was raised Fundamental Baptist in your classic all-white small town. We had one black person in a town of 2,000. Oh, yeah. I’m THAT stereo type. My girl was raised as a second generation Southern Georgia family whose great great grandparents worked the cotton fields. She grew up in Buffalo where her black classmates beat her up because she was a smart black girl. This article is a summation of our conversation. Here is what we concluded.

Opinion, fact, or state of being?

Hate, racism, fear…these are all opinions and/or a state of being. Not Fact. Either something can be proven (Fact), it can be presented as a possible fact (theory), it is a feeling and/or emotion (State of Being), or it is an opinion (Belief that can not be proven). An easy way to think of this…adjectives are opinions. Nouns are facts.

Is it wrong to swear? It depends on the rules laid down by any one group. The people in my former Baptist church? Swearing is wrong. The local college dive on a Friday night? Yeah, fuck that shit. Swearing is not wrong. On a whole, we can most likely agree that rape, murder, and pedophilia is very wrong depending on the culture that you’re in…hence the need for our legal system. We can also haggle over the degree of right and wrong. You said “fuck?” Probably not as wrong as killing someone. All of these are social rules. Not feelings.

In case you didn’t know, color is an opinion because it changes based on our brains, and the nerves connecting eye to brain. No one nerve is alike. Ask a color blind person if they see blue, green, or gray. Color is an opinion.

Self-Preservation is at the core of Hate and Fear.

Fact: Hatred is a secondary emotion. Hate always follows fear. Fear does not always lead to hate. Fear can also lead to paranoia, running away, and/or discomfort.

Hatred, prejudgment, and racism. Is it wrong? Before you jump in screaming, “YES!” slow down.

Hating Hitler is neither right nor wrong. Hitler’s genocide? Wrong. Hitler hating Jews? Neither right nor wrong. Hitler acting on that hate? Wrong. You hating Nazis? Neither right nor wrong. Justified? We’re talk about that on another day. Hate does not bring into question a moral line. Hate and fear are only data. Data taken from the experiences that you have lived. I hate spirders. Scared to death of them. Then again, I was stuck in a nest of them when they hatched once. I was eight years old, locked in the back of the station wagon on the highway, and I couldn’t get them off of me. I’m entitled to this hate. It doesn’t make me right or wrong. You’re probabaly sitting there thinking, oh you poor thing. I’ve earned the right to fear and hate spiders and no one stops for one moment to think, “Is it right or wrong?” You can bet your ass I squash the damn things when inside my house every chance I get. Feelings are only input taken from a previous experience to aid in self-preservation. You walking around slaughtering everyone who you think is a Nazi? Wrong.

The act of hatred itself is neither right nor wrong. It is just a feeling. Feelings just are. This is a State of Being like having the flu, feeling sad, or being nervous over an upcoming exam. Feelings and emotions are only things that exist to aid with self-preservation and, at the core of all racism are emotions…the state of being. Hate and fear. Fear is neither right nor wrong. It just is. We act on that fear and judge people based on our fears, unknowns, and experiences. It is our experiences that we tap into when judging a person…all for the sake of self-preservation.  I hate my rapists. I hate the pedophile who preyed on me. I’m entitled to that hate. I’ve earned it. It is neither right nor wrong.

The Buddhist would say that so long as there is hate, there can not be peace. This is true. But my time for peace has not yet come. Those abusers have earned a whole lot of hate from me…hate that I have denied myself. And I have a whole lot of hating to make up for the decades I have excused them their actions. Don’t tell me that hate is not right or wrong. It simply is the state of being that I am in right now.

Self-preservation does not mean you or I have the right to kill, harm, or attack anyone…unless your life is in immediate danger (self-defense). We can all agree that harming another person is wrong (Back to that social norm again) unless someone is standing over you ready to take your life from you. Self-preservation again comes in and you fight. You walk away with earned hatred. Hatred just is. Killing is wrong. But is racism wrong? What is racism? 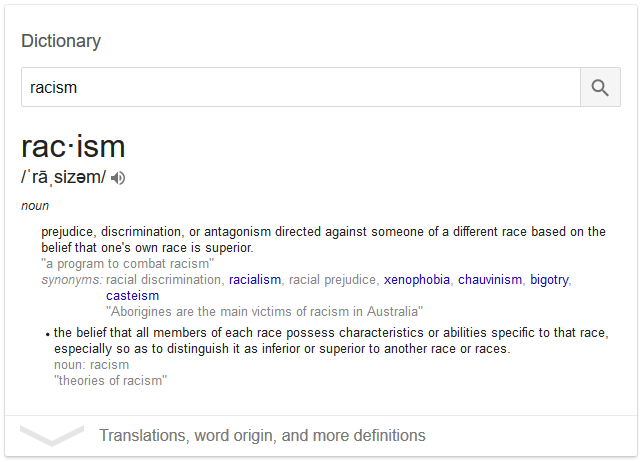 “To distinguish [the race] as inferior.”

What if you don’t direct that hate? What if you hate, but you don’t feel you are superior? What if you keep your hatred for another race or gender to yourself? Is it then racism? I don’t believe it is. I believe racism is an emotion, a hate that stems from fear due to an unknown or known experience. A racist individual is simply exercising self-preservation. It may be inaccurate, but that is neither here nor there. The question is, is it wrong?

No. I don’t believe the feeling of racism is wrong. The racist person may be incorrect, but racism itself…I don’t think it’s wrong.

Now don’t get me wrong. Under no circumstances is anyone allowed to act on that hate. Hate all the people you want. French, Blacks, Whites, Irish, Jews, Christians, Men, Women, Atheists…Hating is unprocessed hurt. But don’t you dare act on that hate.

Internal conflicts: Acting on them externally or keeping them internal.

This brings me to my previous statement: “I am not racist. At least, I hope I’m not. I certainly never intended to be.”

If there is no intent to be racist, then can you be? I don’t know. The conversation didn’t make it this far.

We did discuss prejudgement, generalization, and good old fashion pride. I am a New Yorker! I am filled with New York pride. Do I believe New Yorkers are better than Californians? No. But I do believe New York is better than California. In fact, I hate all other states for one reason: it isn’t New York. I love my New York so much that I don’t love any other state because it isn’t home. Am I better than the people in those other states? Hell no! I just don’t love their homeland because it isn’t my homeland, my beautiful New York.

How do I feel about the New York/North Eastern stereo types? Hurt. The majority of people I have met in New York are kind and warm. Many of us are cold, hard working, and focus. We are an impatient people. We are cold-hardy. Many of us use work to escape our problems. A lot of us also sit on our butts and collect child support/alimony/well-fare. Many of us hate pumpkin and maple. A lot of us loathe snow and the cold. I have yet to figure out these people.

I was taught by my Fundamental Baptist back ground that if you mention to a black person that they are black, they will mug you/beat you. I hate that lesson. We call that White Man Syndrome. I inherited that from my small town. I hate it. It’s hurtful to my friends. I know this stereo-type is wrong. I know it has no merit. Under no circumstances to I express this feeling/belief. I keep it to myself because its my own internal conflict. Not yours.

I will say this in conclusion, I do so very much hate the hate that has swept the country. We’re all talking about racism now. *smiles* I’m glad for that. I believe ignorance breeds hate and fear…Perhaps, in talking about it, we’re killing the ignorance and, in so doing, removing the fear of the unknown and with it the hate. Maybe Mr. Freeman was more wrong that I thought. Maybe, we all need to talk about it, just a little bit more.